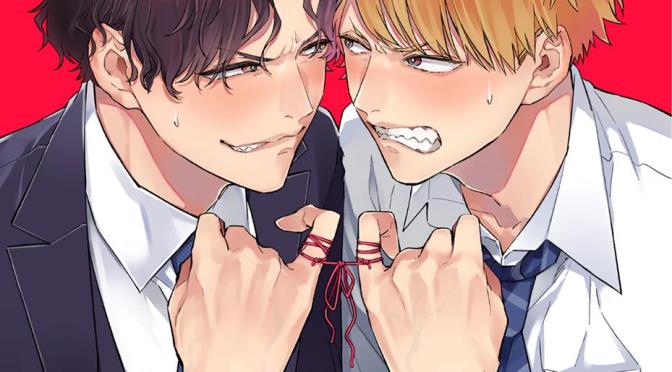 I will admit that Omegaverse stories are kind of my guilty pleasure. I mean, sometimes you just want to read some smut and oooh, you get that in Omegaverse. Unfortunately, many Omegaverse stories follow the same storyline of Omega getting pestered by Alpha because we’re all apparently animals that can’t control ourselves, so are the Omegas REALLY in love with their Alpha? So when I picked up Unmei no Tsugai ga Omae da Nante (or I Can’t Believe You’re My Fated Partner!) by Haruta and got smacked with the Omegaverse rundown in the first few pages, I lost hope

Luckily, Haruta-sensei proved me wrong!! Also, if anyone is a fan of SasuNaru, then you might get some flashbacks to that ship because, wow, the amount of thick-headedness is hilarious

With everyone in his immediate circle finding their fated pairs and getting married, Shishikura, an omega verging on 30, is feeling pressured. He wants to meet his destined pair too! So after finally seeing so many happy couples, he caves and goes to one of those “fate hunting consultants” where they can help set you up with your Fated Pair. However, before he can hear about any potential matches, he runs into Kotani Haruto, a new employee at his company but also, as Kotani loudly proclaims, his middle school nemesis!

I had so much fun reading this manga! Kotani comes off as over the top when you find out why the two became nemeses. I mean, I guess I would also carry a 20 year grudge if anyone ever insulted my army of husbands. Totally normal. But it wouldn’t just end there because Shishikura isn’t one to just ignore someone who talks back at him. Because of this, the two end up making a great act for the readers, however, one of the things I enjoyed the most about this omegaverse, was how not delicate Shishikura was. In other stories, the Omega and Alpha’s hardly bumped heads because Omegas were the “weaker” species. Here, Shishikura gives as much as he gets but we can also see how delicate his heart can be at times

Actually, my favorite part happens when the two are invited to a mixer and this girl asks Shishikura what his presentation is. He knows immediately that even though he feels the two have been hitting it off, what he says now will make her change her mind about him. After all, who would want a male Omega as their partner? Because yeah, he doesn’t fit the mold of Omega, but technically this is still an Omegaverse story and certain prejudices still hold.

When she answers with a “that’s unfortunate” I was about ready to turn into a 2-D character and knock her out. Luckily, Kotani did that for me and my heart just burst with happiness

It’s these little moments that I especially enjoyed. Yes, it’s fun to see the two of them getting hot and bothered on the streets and in the sheets but when they really show how they feel, MMM, gets me all the time!

Some people might not like the roughness of their sexy time but I just like that their dominant personalities also carry into the bedroom. Also, I like a bottom that knows what he wants and TAKES IT. Well, tries to because Kotani doesn’t give in easily

Sadly, this title has not been licensed in English yet so I’ll be doing the next best thing – adding the Japanese volume to my February cart!

But I’m curious, has anyone read this yet? What did you think? Have you read any of Haruta’s other stories? As of writing this review I’ve read one other and just, it was not as great as this one. In fact, the other was kind of cringe, which surprises me because I felt this one was pretty good. Then again, I’ve heard I’m easy to please

call me crimson. collector of cute boys, master of reading between the lines, carries around special marker to create missing lines, constantly crying, sometimes I watch anime, trying to write smart but so many boys in my brain, it’s hard to concentrate!

This is primarily a BL blog, which means that I read and review and thirst over male on male action, add to this I am an avid shipper so even the “straight” ones are fair game. If you don’t like any of this, please don’t interact with that content. Additionally, boys’ love is heavily 18+ content and as such, I must do my adulty duties and tell any potential minors to NOT interact with this content!

As for my adult viewers, welcome. If you don’t want to see any NSFW stuff, then please turn back

While I keep the blog relatively SFW a) sometimes I can’t withhold any sexy images b) many of the titles I review are NSFW and c) sometimes I just want to show you all the dick. Not to mention all the problematic and toxic relationships! I’ll try to post warnings in my reviews but I may miss certain TWs so please be a responsible consumer

If there’s anything on this blog that is yours and you don’t want me to use, please LET ME KNOW. I try not to use fanart, especially without permission. Aside from this, all other media on this blog is used for review and screaming purposes only

No problems? Then happy exploring~

p.s. Please consider taking adblocker off for this site, it would really mean a lot to me!

LOOK WHAT WAS AT THE BOOKSTORE 😍😍😍😍 reminds me that maybe I should continue reading the #manga #jujutsukaisen #jjk
I wasn't planning to host #thejcs this year but it happened and I am now currently taking submissions! Did you make something in March that you're really proud and/or excited about? Then head on over to my Twitter (anerdyfujocries) and leave a link to that content (you can also find the link via my blog, which is on my IGs profile) 😍
Did I just spent 45 minutes at #kinokuniya #bookstore? Yes, yes I did and you know I instantly nabbed this book because yeah all the cute gay boys but have you read this super #cutegaygirls #webcomic now turned #book?!?! THIS SPLITS MY FACE EVERY TIME I READ IT BC OF HOW ADORABLE THEY ARE 😭💯😍💞 #japanesemanga #japanesevolumes #tanjiu #tanjiumanga #tanjiumanhua #beginwithyourname #sqbeginwithyourname #lesbiancouple #girlslove
Forgot to share here but here's the latest #mangareview!! 🔗 Link in bio 🔗 I read this one a few days ago and it was so cute!! Judging by the cover you'd think it was your usual #boyslovemanga but I felt it was so much more 🥰🥰 And the fluff!!! Be still my heart 💘💓 Need to get a physical copy ASAP! Can read via Futekiya ☺️☺️
Advertisements

Are YOU Amped Up?

Helping you learn languages faster and with more fun

It's An Anime Thing

A place to share my random thoughts, opinions & hobbies.

Anime as a Cup of Tea

Giving stories a final touch, while sipping a cup of tea.

Teach ESL and Travel the World

Writing about anime...hope it makes sense.

Where insights on anime, games, academia and life dare to converge

Life is awesome with colors

inconsistency at its finest

Writings of an Otaku

A nerdy blog for nerdy people!