[OWLS] Yearning for the Unknown

Hey guys! Welcome back to this little corner of the internet. If you’re reading this, chances are you were redirected here by Auri’s post about the beautiful series (that I now want to read) Mikako-san. And if not, you might be asking yourself what the heck is going on. Don’t worry, OWLS has got you covered

OWLS is a group of content creators who promote acceptance of all individuals regardless of race, nationality, gender, sexual orientation, religion, and disability. And every month we do blog tours to talk about these things in the hopes of creating love in the community. And well, this is my contribution this month! Honestly, I almost didn’t participate. Things that have to do with love are really not my forte

The theme for this month is “Lover”

Just like others have said and will probably continue saying, I don’t have much experience in the romance department. Yeah, I dated before and yes I’ve had countless of crushes before, both of the 2D and 3D variety, but what does it really mean to love someone? And to be in a relationship?

In media, when it comes to lovers, the feelings are all in the heart and people tend to do some crazy things for the ones they love. And oh boy, do I mean some CRAZY things. And to a certain degree I know it’s not true, but where do we draw the line? What sort of behavior is acceptable when it comes to the one you love? Should you be persistent? How much do we submit to the other person? Or as some people say “compromise”

How do we show love?

I grew up in a household that wasn’t very touchy-feely (still isn’t). I got in trouble when I had my first boyfriend because it’s not proper for a girl to be doing these things and after that things just wouldn’t settle down. I felt weird having my hand held or being hugged in public. And kissing? Nope. I shied away from all these things…if they were of the romantic nature. I didn’t mind hugging my friends or going about with our arms together. And well, kissing outside of a romantic relationship? Only with your parents if you are greeting or saying bye, with your pets, and with babies

It’s kind of sad but there is a sense of shame that exists with PDA and it’s something I haven’t grown out of. Which is why I didn’t feel like I could contribute much to this month’s theme. But I decided to give it a shot and chose one of my favorite series to talk about (it also helps I happen to be rewatching it)

The anime series I’d like to talk about for this tour is called No. 6. No. 6 is set in a world where the countries as we know them don’t exist anymore. Instead, there are six sectors and Shion lives in Chronos, which is located in Number 6. One day when Shion is 12 and on track to be admitted into the Gifted Program, a boy with an injury sneaks into his room (courtesy of Shion leaving his window open as he screamed into the heavens). Shion is instantly attracted to this person named Nezumi who has a gunshot wound, knows how to incapacitate him, and (as he later comes to learn), is a wanted criminal

It was only one night but it was enough to mark Shion for the rest of his life. Exiled to Lost Town after the authorities find out he’d harbored a criminal, Shion finds the next four years of his life filled with a desire for something he can’t pinpoint

He had lost the chance to be part of the Gifted Program, but the consequences of his actions didn’t phase him. In fact, aside from this feeling of missing something, he lived his life well and in a state of monotony

Until Nezumi once more appeared in his life, bringing back that feeling of life and excitement he’d experienced that night

While watching No. 6, we quickly pick up on a few things about this “utopia”. While it seems like a dream to live in Chronos, what with the high tech vibe and nature blooming everywhere, the older generation knows what’s up. Safu’s grandmother sums it up perfectly:

Here in No. 6, Chronos, everything is provided for us. Aside from gardening and knitting, I can’t think of anything to do tomorrow or the day after that.

Even Shion’s mother, who is still quite young, is seen lounging around at home with a bored expression on her face. If she needs to call Shion for anything, she uses the technology in the house, not needing to get up from her spot on the couch. I would even go so far as to say she lets her appearance become unkempt, as her hair is long and she wears indoor comfy clothes. There is only once where we see her actually doing something while she is in Chronos, which is cooking

It’s probably because of this sleeky clean, high tech, and peaceful existence that Safu also comes off as robotic. The people of No. 6 are not encouraged to have feelings outside of your everyday functions and if you do, chances are high that you’ll get a visit from the police and sent to the Correctional Facility for creating chaos

So yes, I still laugh at Safu’s confession every time I watch and think about her. It seems really odd but it makes sense. She’s right that it’s an expression of the desire to reproduce, but why does she feel this desire? It’s not in any of the science books that she’s read in her studies and because No. 6 is thorough in its cleansing, Safu wouldn’t be able to find it in the classics either. It makes me extremely curious as to what type of literature exists inside of No. 6

Nezumi, however, tickled Shion’s curiosities from the first time they met and he continues to hold his attention four years later. Nezumi is completely different from the people inside No. 6 (for obvious reasons) and that makes him an attractive prospect. He was able to save Shion when he was being transported to the Correctional Facility for “killing someone”, he created a connection between Shion and his mother while he was hiding outside the wall, but most importantly, he knew things that Shion didn’t.

Shion was accepted into the gifted program at a very young age and he had dozens of awards for his intellect, but there was one aspect that he was clueless in. And Shion was openminded enough to want to learn more about the world. He didn’t want to stay confined inside of No. 6

While outside of No. 6, Nezumi introduced Shion to literature, performances, dancing, and expressing feelings, both good and bad.

But it wasn’t all just one-sided. Like Shion, Nezumi was transfixed by the unknown that he found in Shion the night they first met. Nezumi had been driven to hate No. 6 because of the atrocities that the government did to his family and was willing to destroy anyone in order to get his revenge. Shion became that exception without realizing it. He taught Nezumi that not all people were evil, that there were still people around that wanted to help others out, that they could be selfless. Shion didn’t just save Nezumi’s life that night, he also saved his soul (to be corny)

Which is why he “repaid the debt” when Shion was being taken for murder and why (in the later episodes), Nezumi berates himself for placing Shion in a situation where his kindness and pureness is “being corrupted”

I want Shion to stay Shion.

While both Nezumi and Shion gravitated towards the other because of these unknowns and curiosities, I also just adored how their relationship went beyond this. While living together, they often bumped heads. Shion for being too naive and Nezumi for believing in only black and white. And while Nezumi would have preferred to keep Shion safe from the atrocities inside the correctional facility, he also acknowledged that Shion had to learn about the world and that they had to be equals

I don’t believe in soulmates in the real world, but I believe that being different or bringing something new to the table will keep a relationship going. I’m not the type to keep to one place or thing for too long, as you guys might have noticed since I started blogging

While I do believe that Shion could have had a nice life with Safu, I don’t think it would have been as fulfilling as his relationship with Nezumi. With Safu’s study abroad trip to No. 5, we see that she learns more about the history of the world and even begins to learn about art (possibly even literature), which in turn made her realize how to label the feelings she had for Shion, but No. 6 has a way of settling inside of you and I’m not sure if Safu would have been enough to sate Shion’s curiosity. On the other hand, Nezumi offered him a whole different view of the world and new experiences and guys, you saw those fallen for you eyes they kept giving each other right?

In a sense, this sounds like anything new would make Shion chase after it and I’m not saying that’s not the case (I can totally see that happening), but I feel like Nezumi would be more indulgent with his curiosity. Not to mention that Shion was already settling in rather well at Nezumi’s home, planning for the summer and how they would continue to live together and having new adventures #emotional

I guess what I’m trying to say is that Nezushi enforces my feelings of being with someone who isn’t exactly like you, to trust your feelings, communicate, and treat your partner as your equal and with respect. To be there for them when they need it but also let them grow on their own. That it might seem like things won’t work out because both parties are so different but in fact, it CAN work out if both parties want it to

OK. I’m starting to ramble, let’s wrap things up. Thanks for stopping by to this post where I think all I did was fangirl over my OTP Nezushi (which you all should be doing too, come on, look at these boys being so cute and so in love with each other). Up next for this Lover tour is Fred, so make sure to stop over at his blog tomorrow!

p.s. Wow I am bad at titles what the heck is even that 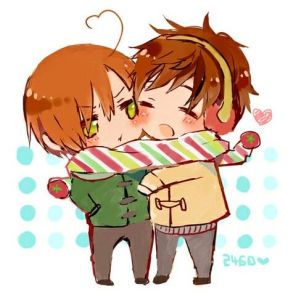 call me crimson. collector of cute boys, master of reading between the lines, carries around special marker to create missing lines, constantly crying, sometimes I watch anime, trying to write smart but so many boys in my brain, it’s hard to concentrate, enjoy your stay!