Hey guys! Today we have a special post, as you may have noticed from the OWLS Blog Tour Schedule I posted last week, and it just so happens that 1) I mark the middle of the tour and 2) today was the inauguration

As I was driving home tonight, I heard that Lake Shore Drive was closed because of protestors. I would have been down there as well, if I could have gotten out of work, but alas, I was stuck listening to the Inauguration because my boss is a Trump supporter…but I digress! Why I mention the inauguration is because it fits perfectly with OWLS first blog tour, which is centered around Disruptors.

What is a disruptor?

An individual or a group disturbing a system or social norms/conventions that they believe is destroying what is morally right.

For today’s tour I actually wanted to focus on Erased and how the term disruptors works for the series. SPOILERS from here on out. You’ve been warned~

The biggest disruptor for this series is our main character Satoru as Revival – his involuntary ability to go back a few seconds in time to stop a tragedy from happening – forces him into such a position. Since we’re looking at Disruptors in a positive light, mentioning this is involuntary makes it seem negative to me. A disruptor should be doing things voluntarily because they believe their actions are stopping something immoral from occurring (based on our definition).

In that sense Satoru doesn’t fit our description of being a disruptor just yet, however, as the series progresses he becomes more involved in the lives of the people around him and he truly comes to care for them.

One person in particular is Kayo Hinazuki, his classmate that dies in the original timeline and who is the key to solving the mystery of the serial killings.

When he goes back in time, Satoru ends up back in elementary school where he realizes that the answer to saving his mother is with Hinazuki. He tries befriending her with ulterior motives and Hinazuki sees through his mask, saying they’re both alike. As they come to know one another, Satoru realizes that Hinazuki is being abused by her mother and that Hinazuki is silently asking for help.

We also learn that he wasn’t the only one to notice, however, he was the first to take action and that’s one of the reasons why I chose him as this tour’s disruptor.

I think it’s great that people are out on the streets, fighting for what they believe is right and that they’re not just doing it for themselves, but for loved ones and strangers who they love because they’re human and deserve it. I also think that an effective disruption should come from a person level and at an early age. And like all disruptions, it’s more effective when you have numbers on your side!

In Erased it’s no different. Satoru tried to do things on his own and realized that he needed help. He couldn’t save Hinazuki by himself, and his friends were immediately onboard with his plans because they wanted Hinazuki to be happy and safe. They didn’t know the real circumstances like Satoru did, which, in a sense, made their actions more genuine. I also don’t think it’s bad to approach someone because you have ulterior motives, granted they’re not disrespectful motives.

Going forward, Satoru’s disruption placed a lot of characters in situations that only his actions could have shaped them into.

Satoru’s mother had to take care of him for YEARS after he was nearly drowned in the lake. Because of this, she was more protective of him and better appreciated having a child (not saying she didn’t before but nearly losing someone dear to you makes you realize certain things)

Hinazuki’s mother was reunited with her own mother and was able to let go of those feelings eating her up. I don’t believe we learn exactly what happens with her but if Satoru hadn’t tried to help Hinazuki, Hinazuki’s mother wouldn’t have changed or gotten proper help. She would have still been bitter about her own upbringing, further damaging her mentality. 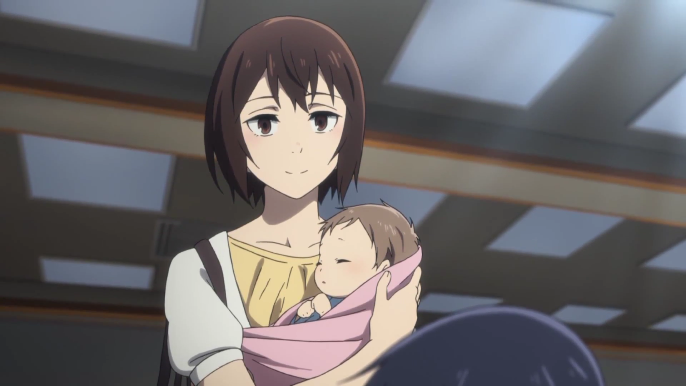 One of our key character, Hinazuki finally survived both an abusive household and being murdered. While she did end up moving away, I believe it was a better option than disappearing as she had hoped. When she is reunited with Satoru we see that she looks happy, healthy, and has even started a family of her own.

And really this list could go on and on, as every character that Satoru interacted with was affected in some way.

Of course, if we try to trace back how Satoru became a disruptor we could come back to a few other characters in the series, who are also disruptors in their own way.

Our more obvious one being the show’s antagonist.

If this guy hadn’t murdered Satoru’s mom then there wouldn’t have been a need to go back in time. He could have continued to work at the pizza joint, wondered about “kids these days” and led a very normal and possibly mediocre lifestyle. But his mother was murdered and he had to figure out who the culprit was if he wanted to 1) save his mother and 2) save himself as he was the only suspect of said murder.

We could also argue that because Airi believed in Satoru unconditionally, Satoru found the strength to keep fighting. Afterall, if you’re in a depressing situation where everyone believes you murdered your mother and your first attempt to save her was futile, eventually the stress would take its toll. Having Airi help him out while he tried to figure out what was happening (in the original timeline) was a huge helping hand. As for her motives, I believe they were the truest out of everyone.

Erased really emphasizes that a single person can make a huge difference, which is something I believe we struggle to believe (as we saw in the elections). There’s always that nagging thought of what difference will I make? But it’s never really just one person. It’s many individuals that take initiative and influence one another. I think we all have disruptors in our lives that have shaped us and possibly even helped us in the long run (whether they know it or not).

And I believe we should all aim to be disruptors. I know it can be hard to publically give our opinions on things, to go out and march on the streets where anything can happen, especially if it’s surrounding a controversial topic. There’s always that worry of backlash and if that’s the case, taking an interest in others is the next big step.

It sounds like something simple, but we’re living in a time where people don’t talk to one another as often as before and that creates rifts and misunderstandings.  If we can say hello and learn about the people around us, we can create a conversation and understanding can come from it. And how we need understanding right about now.

This may also sound extreme but we could potentially be saving someone’s life with a few kind words. We never really know what people are going through, as we saw in Hinazuki’s case, until we get to know one another.

Thanks for reading this super long and boring post! Don’t forget to check out the rest of the Blog Tour as well~ Want to know more about us or possibly join in on the fun? Check out this post!

Don’t forget to check out the next post on Nice Job Breaking It, Hero this coming Monday! Naja will be focusing on Disruptors in Cowboy Bebop~

Liked what I had to say? Want to see more and/or keep up with updates? Then find me on the interwebs!

Thanks for the support!

31 thoughts on “OWLS Disruptor Blog Tour: Connections in Erased and How A Single Person CAN Make a Difference”

call me crimson. collector of cute boys, master of reading between the lines, carries around special marker to create missing lines, constantly crying, sometimes I watch anime, trying to write smart but so many boys in my brain, it’s hard to concentrate!

This is primarily a BL blog, which means that I read and review and thirst over male on male action, add to this I am an avid shipper so even the “straight” ones are fair game. If you don’t like any of this, please don’t interact with that content. Additionally, boys’ love is heavily 18+ content and as such, I must do my adulty duties and tell any potential minors to NOT interact with this content!

As for my adult viewers, welcome. If you don’t want to see any NSFW stuff, then please turn back

While I keep the blog relatively SFW a) sometimes I can’t withhold any sexy images b) many of the titles I review are NSFW and c) sometimes I just want to show you all the dick. Not to mention all the problematic and toxic relationships! I’ll try to post warnings in my reviews but I may miss certain TWs so please be a responsible consumer

If there’s anything on this blog that is yours and you don’t want me to use, please LET ME KNOW. I try not to use fanart, especially without permission. Aside from this, all other media on this blog is used for review and screaming purposes only

No problems? Then happy exploring~

p.s. Please consider taking adblocker off for this site, it would really mean a lot to me!

LOOK WHAT WAS AT THE BOOKSTORE 😍😍😍😍 reminds me that maybe I should continue reading the #manga #jujutsukaisen #jjk
I wasn't planning to host #thejcs this year but it happened and I am now currently taking submissions! Did you make something in March that you're really proud and/or excited about? Then head on over to my Twitter (anerdyfujocries) and leave a link to that content (you can also find the link via my blog, which is on my IGs profile) 😍
Did I just spent 45 minutes at #kinokuniya #bookstore? Yes, yes I did and you know I instantly nabbed this book because yeah all the cute gay boys but have you read this super #cutegaygirls #webcomic now turned #book?!?! THIS SPLITS MY FACE EVERY TIME I READ IT BC OF HOW ADORABLE THEY ARE 😭💯😍💞 #japanesemanga #japanesevolumes #tanjiu #tanjiumanga #tanjiumanhua #beginwithyourname #sqbeginwithyourname #lesbiancouple #girlslove
Forgot to share here but here's the latest #mangareview!! 🔗 Link in bio 🔗 I read this one a few days ago and it was so cute!! Judging by the cover you'd think it was your usual #boyslovemanga but I felt it was so much more 🥰🥰 And the fluff!!! Be still my heart 💘💓 Need to get a physical copy ASAP! Can read via Futekiya ☺️☺️
Advertisements

Are YOU Amped Up?

Helping you learn languages faster and with more fun

It's An Anime Thing

A place to share my random thoughts, opinions & hobbies.

Anime as a Cup of Tea

Giving stories a final touch, while sipping a cup of tea.

Teach ESL and Travel the World

Writing about anime...hope it makes sense.

Where insights on anime, games, academia and life dare to converge

Life is awesome with colors

inconsistency at its finest

Writings of an Otaku

A nerdy blog for nerdy people!